The Fathers of the Pittsburgh Oratory 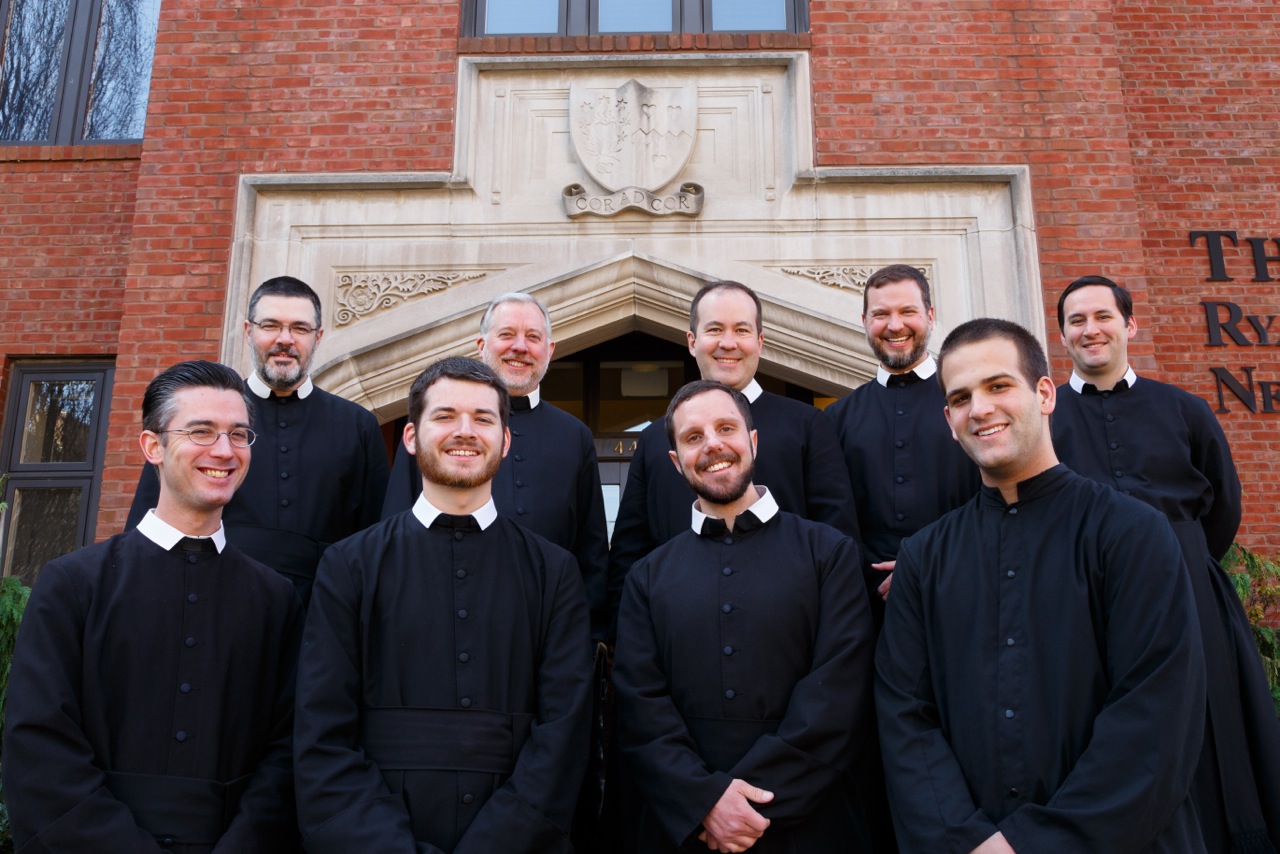 The Pittsburgh Oratory hosts and comprises a number of different groups and works in the Oakland section of the Pittsburgh community. Yet, all are united in the spirit and purpose of St. Philip Neri, a Florentine priest of the 16th century whose legacy extends to our own time. His son in The Oratory, John Henry Newman, handed on and renewed that legacy, even while lending his own name to several of the efforts in which this Oratorian community is engaged.
The Oratory in Pittsburgh is one of 80+ Oratories of St. Philip Neri worldwide, and one of 8 (at present) in the United States. While each Oratory is governed by the Constitutions of the Oratory as established initially by St. Philip Neri himself, and occasionally inspected for its fidelity to these instructions by an Oratorian appointed to report to the Vatican Congregation for Institutes of Consecrated Life, the application of these statutes is left to the semi-autonomous governance of each Oratory’s own general congregation (its full members) and regularly-elected Provost. Each Oratory collaborates closely with the local church and its bishop, “to renew, create and perfect the manifold pastoral means of service and animation.” (Mutuae Relationes) It is by its own conscientious fidelity to the form of life established by the holy genius of Philip Neri that every Oratory makes its peculiar gift to the people of God in the diocese.

As a worldwide institute, the distinctiveness of the Oratory is well characterized and summarized below by Father Raleigh Addington of the London Oratory, in an excerpt from his pamphlet, What is the Oratory?:

Congress of Oratorians, 1948We are frequently asked, “to what Order do you belong?” and the answer quite simply is that we are not a religious order at all, but secular priests living in a community under a rule. But then people may ask, “how long have you been here,” and they are surprised if one says twenty or thirty years, because they assume that all secular priests are moved about from time to time by the bishop. Oratorians are not like that either. A man enters a Congregation of the Oratory with the intention of staying and working in the same place all his life.
There are two cardinal principles of The Oratory, and the first is that we are attached to our Congregation only by the bond of love and common purpose and not by vow, oath or promise, so any Oratorian is free to leave his Congregation to join a religious order or become a priest working for a diocese. But once admitted to it after a probation of three years he cannot be taken from it or dismissed from it except for some grave offense. The second principle is that each house of The Oratory is self-governing and independent of all others. A man belongs to The Pittsburgh Oratory or The Metuchen Oratory (there are seven in the United States), to The Birmingham Oratory, or The Roman Oratory. If an Oratory has a parish or a diocesan ministry – and not all do – it is subject to the local bishop in parochial matters, but in respect of its internal regime, each Oratory is directly subject to the Holy See, and there is known as “Pontifical”.
Lastly, it may be asked: if Oratorians are secular priests, why does a man enter a Congregation of the Oratory?Pope Benedict XVI & Fr. Cerrato, the Procurator General of the Oratories How is it a special vocation? In the first place it must be because he is attracted by the person of St. Philip Neri, and wants to work for the good of souls in his spirit. It will also be because he feels the need, or at least appreciates the value of community life for pastoral and apostolic work. He will find in The Oratory more opportunity for prayer, reading and writing than the circumstances of the average priest in a city will afford, and because he likes to “stay put”, being prepared to exercise the priestly ministry in a restricted sphere without limelight.

In 1961 the Bishop of Pittsburgh John J. Wright, who eventually would be widely known as Cardinal Wright, conceived the idea of bringing to Pittsburgh an Oratory of Saint Philip Neri in order to minister to the students of large secular universities under his pastoral care. While many dioceses support “Newman Clubs” – spiritual and social centers for Catholic students on secular college campuses – Wright wanted to take such an initiative one step further. Through his knowledge and love of the work of the great nineteenth-century scholar, churchman, Oratorian, and now Blessed, John Henry Cardinal Newman, Wright was inspired to create the University Oratory of the Holy Spirit Parish. This parish, serving the faculty, staff and students at Carnegie Mellon University, Chatham University, and the University of Pittsburgh would be administered by the priests of his newly founded Oratory.
By 1967 Wright’s Oratory was canonically established as a pontifical house of the Confederation of the Oratory of St. Philip Neri, a Society of Apostolic Life in which members are intended to live in community for life without taking religious vows but bonded only by charity. The Pittsburgh Oratory is one of approximately seventy Oratories in the world, housing about 450 Oratorians. In the United States other Oratories may be found in Rock Hill, SC; Monterey, CA; Pharr, TX; Brooklyn, NY; Metuchen, NJ; and Philadelphia, PA.
Today, The Pittsburgh Oratory is grateful for the opportunity to serve and support some 10,000 Catholics that comprise the local university and broader Newman scholarly communities. Its essential mission, however, is to be faithful to the charism of its originator and founder, St. Philip Neri. Through our work, our prayer, and our community life we seek day by day to live his motto from the writings of St. Paul, “Gaudete semper – Rejoice always, again I say, rejoice!“
Vision
The Pittsburgh Oratory was founded with a close connection in mind to Newman’s idea of a University and the ethos of his Oxford aspirations. Even so, campus ministry is not exclusively the work of Oratorians. Most Oratories administer parishes, and do so in large urban areas such as Toronto, London, Vienna, and Rome. Yet, all have programs dedicated to the spiritual, intellectual and personal formation of college students and youth, a consistent echo of St. Philip Neri’s pastoral care for the youth in turbulent sixteenth-century Rome.
The Pittsburgh Oratory likewise promotes and fosters the spiritual growth and maturation of all – including adults and families – who find in St. Philip Neri, Bl. John Henry Newman, and their spiritual path, an example and help in fulfilling their own personal call to holiness and apostleship. The devotions, disciplines, programs, and fellowships that follow naturally from this goal of, “sharing all things in common,” generates a distinctive Oratorian communitas – both a common joy in the manifold gifts of the Spirit, as well as acommon task and responsibility to act in and from these gifts as salt and light in our ecclesial, social, and academic spheres.
This larger “community” formed around the life of the priests of the Congregation of the Oratory is often referred to as the “Secular Oratory”. Everyone who attends the Oratory for any of its sacramental, devotional, or educational activities is welcome to take part in and even register formally as a member of the Secular Oratory. Although these sorts of activities and this sort of community may resemble that of many parishes, nonetheless, The Oratory is not a parish.