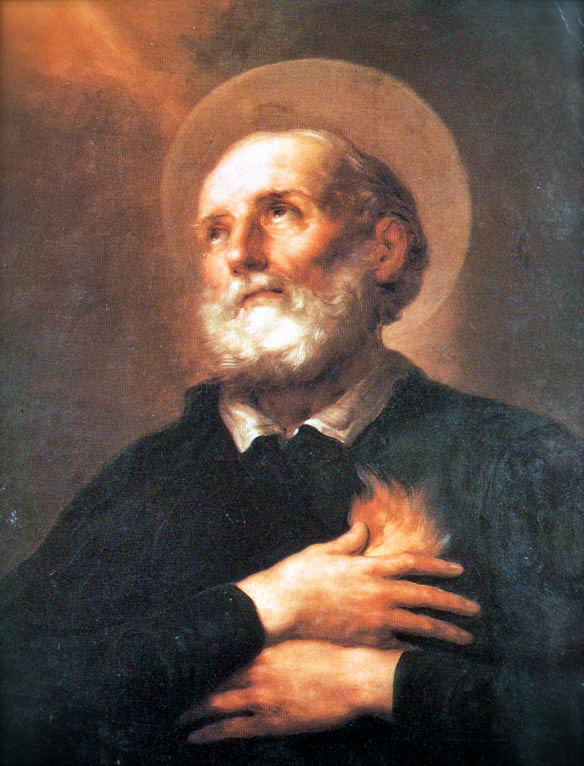 St. Philip Neri (1515-1595) is known as the founder of the Roman Congregation of the Oratory. This did not come about, however, by any human plan or mind, but only in the course of Providence, which waited for many years of Philip’s long life to accomplish this lasting work. Born on July 21, 1515, Philip grew up in Florence, where he was known as “Pippo Buono” – good little Philip – and was educated by the Dominican friars of San Marco. Though he grew up during a turbulent time in Florence and in much of Europe, Philip managed to hear the call of God to something higher than the worldly success that both his father’s and his uncle’s business promised him. By divine guidance he went to Rome, and worked and carried on there for several years among the Romans and his fellow Florentines in such a way of holiness and inner joy as to lift their spirits in those dark hours. While Sts. Peter and Paul are the classic “Apostles of Rome,” Philip came to be considered the “second Apostle of Rome,” for the singular renewal God enacted there through him.

Vessel of the Holy Spirit

Towards the later years of his youth, he was drawn to the quiet of deep prayer and meditation, and spent long hours in the catacombs of St. Sebastian, in a kind of novitiate. One day, in his 29th year, he experienced the mystical coming of the Holy Spirit as a burning ball of fire into his heart, which remained deeply lodged there for the rest of Philip’s long life. So profound was this experience that many who knew him recounted the strength and vigor of his heartbeat, which was said to shake furniture and at times even entire rooms. After his death, medical examiners found that his heart was in fact physically enlarged to such a degree that his ribs in that area were cracked, a condition he endured from that day in the catacombs until his death.

Still a layman at this time, he spent several years in Rome performing all kinds of good works – especially in ministering to the sick, in catechizing the youth, and in providing for pilgrims – before he was ordained a priest in 1551, under obedience to his spiritual director. He was almost 36 years old, a “delayed vocation” in the extreme by the standards of the day, but without the least difference in priestly zeal and vigor. Philip was especially zealous for the sacrament of penance, to which he drew untold numbers by his constant availability and wise but gentle manner of uplifting sinners to the joy of life in Christ. From the initial group of frequent penitents came the future disciples of “Padre Messer Filippo,” who gave themselves up entirely to him in obedience. Thus were planted the seeds of the future Oratory.

As a priest working in the church of San Girolamo della Carità , he began to receive a group of young men in his room during afternoons, mainly to draw them away from other more dangerous occupations. There he would speak with them on the treasures of Scripture and the Church’s teaching, especially in history and morality, not as an academic with something to gain by adding followers, but as an image of the Lord who was earnestly in pursuit of their souls. This informal discourse on the Word of God developed into something more ritualized, with readings from the lives of the saints and music eventually added, and discourses and responses being offered variously among the participants, sometimes by laymen, sometimes by clerics, an unusual practice for the day. These exercises began to become known – and notorious – throughout the city as “oratory.” All sorts came to attend, but eyebrows were raised when secretaries and musicians of papal and cardinals’ courts were showing up frequently. For these and other reasons, a shadow of fear and suspicion lay over the Saint and his intentions; yet the work of God in the renewal of the city’s spirit, as in the case of the prophets, would not be halted by the quibbles and quarrels of men.

As the years passed, and the community grew in numbers and importance, Father Philip gave more and more duties of government over to his more senior disciples, preferring to advise where necessary, but to devote himself mostly to prayer, confessions, and the personal direction of souls. He worked many wonders in these later years, and schooled his spiritual sons in the art of interior mortification. Silly assignments that were thoughtfully designed to break down their pride was to be the main route to growth, more than the popular external penances alone. Beyond this, however, the deep abiding peace that all experienced in his presence – in the presence of genuine holiness – seems more the reason behind his being called the “saint of joy.” Though he lacked no courage when it came to warning someone of imminent danger, he knew, good pastor that he was, that much of our difficulty in life arises from unreasonable fears; the non dubitare that was more often on his lips appears now as a precursor to the “Be not afraid!” of our late Pope St. John Paul II. This fire of joy was truly the source, the message, and the medium of all his work in this life.

Even as Father Philip was directing architects about the dimensions for the new church that was to replace the dilapidated Santa Maria in Vallicella – the church given to the Oratory for its use – he nevertheless maintained that he himself was not actually a founder of any kind, not even of the Oratory, which was rather the Blessed Virgin’s work. One can only imagine the profound relationship of prayer he must have enjoyed with her, the archetype of those who receive the Holy Spirit with joy, and bear Christ to the world. An apparition he received of her when he was sick in his last days has become a widely-known icon of his filial devotion to and dependence on her maternal care. Shortly thereafter, in the early hours of May 26, 1595, he passed from this earthly life into heavenly glory, surrounded by his spiritual sons, all whispering their prayers to the Virgin.