The Forgotten Great "One" 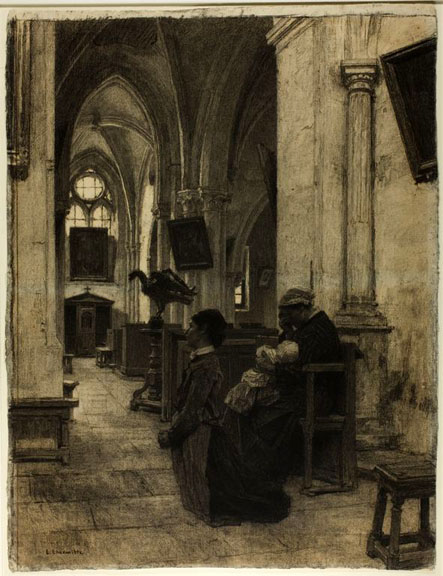 We children of men are made up of five part senses, and only the sixth part is given up to understanding and faith.  But even the little that our senses grasp, must not be hid modestly like a violet in the grass.  It must thrust itself forward, else men will not heed it.  We give fitting attention to the sun which sends down its scorching rays and to the strong wind which violently blows off our hat, or tears a loose tile from the roof.  But at the same time we go our way regardless of every flower, every beetle, and every blade of grass that we tread on, and a whole world of small and great wonders of creation is trampled underfoot.  We do not heed this other world.  This is the rule, and under this rule the Son of God also suffers in His silent sanctuary.

. . . the anxious lover who weeps compassionately for the abandoned One and would gladly make Him the center of all our feelings, thoughts and endeavors, queries: Why, O Blessed Redeemer, doest Thou not arise like a pillar of clouds or fire, casting a bright light by day and gloomy shadows by night on the pathway of the sons of men?  Why dost Thou not descend on us like a hurricane from heaven, or hover like a tongue of fire over the heads of Thy devoted servants?  The eyes of all men would then be on Thee.  Would that Thou wouldst appear in our midst under the energetic form which has been described by John the Baptist - in one hand with winnowing shovel and in the other an axe, here sifting the wheat, there felling the hardened stalks as if they were rotten trees.  And if only the tabernacle would become one day like the heights of Tabor, enveloped in light!

But no!  The Redeemer hears the well-meant lamentation; it comforts Him; it shows Him that a friendly heart throbs for Him; yet He will alter nothing.  He abides in retirement, far away from the broad highway, where everything is arranged for show and to attract attention.  His dwelling place on the altar is small, only two or three feet square.  There He abides quietly and is hardly talked about.  Nowhere is there anyone so retired and contented as He.  But rarely is He to be see on the street.  True, on those occasions, in Catholic countries, He allows a little light to shed its rays in front of Him and a little bell to tinkle.  Whoever meets Him, takes off his hat if he is well disposed, and makes the Sign of the Cross.  But Jesus goes on His way quickly, and soon everything is as before.

At times, too, He gives an audience to His faithful subjects.  Then He occupies a golden throne over the tabernacle.  Thick clouds of incense and joyous hymns arise and peal through the church.  But Jesus does not stir; He utters not a word, nay, not even a whisper, much less speaks "as one who has power" (Matt 7:29).

Yet He is God and His knowledge is all-embracing.  Are we to assume that He does not know that we are like little children, to captivate whom one must be surrounded with sunlight and elated by wild trumpeting?  Did not dense crowds of people march behind His ancestor, David, and sing his praise in triumphant strains?  True, David on that occasion was decorated with green bay leaves and was returning as victor from a blood drenched battlefield.  But no notice was taken of him later, when he fled.

Jesus knows all this very well.  He knows, too, how easily He could attract the applause of the multitude.  It would be quite enough to thrust back the white veil of the host and appear to us in the majesty of the Son of God.  Instead of a few faithful servants, millions would then fall on their knees and humbly confess: "Truly this is the Son of God!" (Matt 27:54).  Yet He seems to do the exact opposite.  He wraps Himself up more closely in the white veil, and addresses to that little band the well-known question: "Will you also go away?" (John 6:68).

Why this peculiar attitude?  If Jesus were a human being with faults, one would perhaps attribute His attitude to unreasonable obstinacy, owing to the fact that the idea of keeping Himself concealed lies like an immovable rock in the clear mountain lake of His soul, and never will yield, but force all waters to move around it, whether they hiss or rage or surge.  But He is God, the highest perfection, and hence all His acts must have a profound, noble, and pure meaning.

The veneration which is found on outward appearance and clear perception resembles brummagem gold, which is not a suitable offering to the all-holy God.  Its brilliance may rejoice human eyes, but can not deceive the Searcher of hearts.  If our veneration is to resemble pure gold free from base alloy and dross, which can stand the test of fire, then faith must join our hands, and faith must bend our knees.  And even if, as on Calvary, there should be found but two souls at the tabernacle, two souls resembling Mary and John in loyalty and faith, their devotion would seem to Him more acceptable than if a whole crowd, dazzled by the brilliance of His outward appearance, should lie on the ground, trembling and shuddering.

Once upon a time the Redeemer went about the country with His Apostles in simple pilgrim's garb.  At the first glance He might have been taken for one of them, only that His eyes shone more wonderfully, and His bearing was that of a king.  Suddenly He put the blunt question: "Who do you say that I am?" (Matt 16:15).  Peter impetuously thrust himself forward and worshipped the simple preacher as the Incarnate Son of God.  Was not the heart of the Redeemer overcome with joy by the homage, and was not Peter's noble deed rewarded by a blessing: "Blessed art thou, Simon Bar-Jona!" (Matt 16:17).  On another occasion the Savior had cured the sick before a vast multitude, and driven out devils, and finally had multiplied a few loaves of bread in a miraculous fashion.  The crowd marveled and expressed their admiration in unmeasured applause.  Finally they wanted to make Him king.  Did this turbulent shouting and hand-clapping make His heart beat faster and force from His lips a fresh blessing?  No.  He fled from their midst and escaped into a solitary spot in the mountains to pray.

Yes, "Blessed are they who do not see and yet believe!"

So we must content ourselves with the modest tabernacle.  It will never be enveloped in heavy thunder clouds, like Sinai, nor yet in the glory of Heaven, like Tabor.  If it were, the worship of the Eucharistic God would be far, far easier for us human beings, so dependent upon our senses.  But much would be thereby sacrificed in worth and merit.

But one thing we can and will do; namely, to nourish and strengthen the light of faith by contemplation and prayer and by the grace of God, so that it may grow to be a clear and bright sun that will send its rays through the misty veil of the tabernacle and manifest to us the hidden world of wonders and miracles.  Do thou, O hidden God in the Blessed Sacrament, "increase our faith!" (Luke 17:5).

The Silent Anchorite of the Tabernacle
Rev. F.X. Esser, S.J.