The Breadth of Eucharistic Love 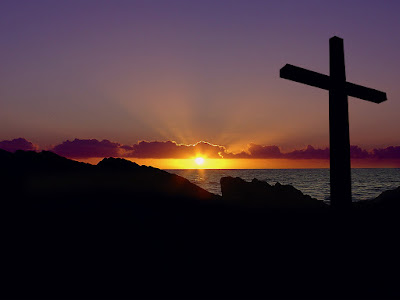 In this second reflection on the Dimensions of the Eucharist, Jose Guadalupe Trevino speaks of the expansive reach of the Eucharist across all times, places and even through death itself.  In every age we have seen how the Eucharist has inspired, strengthened and given hope to the faithful.  It has given profound expression to faith and to the longing of the human soul for God, courage to those defending the faith against all error and heresy, perseverance to the lonely missionary, comfort to those who mourn the loss of loved ones, and to all, regardless of background, it has been a source of  light and purity, pardon and consolation, immortality and love.  In its breadth, the Sacrament makes us forever and in all circumstances one Body united in Christ's tender love.

The Holy Eucharist does not extend itself only in a general way, over all the centuries: it embraces all times, places and men in a particular way.

The same Eucharist which I adore shone in the obscurity of the Catacombs.  There it strengthened the martyr's heart for the supreme combat; frequently the breast of a confessor of the faith was the altar on which the Holy Mysteries were celebrated.

The same Eucharist which I revere was the soul of the epic centuries of the Middle Ages; their vigorous and dynamic faith inspired the creation of those poems in stone and marble, the Gothic cathedrals, whose heavenward pointing steeples symbolize the longing of the human soul for the infinite.

The same Eucharist which I love saved the Church in the crises of the Renaissance and the so-called Reformation, and, in modern times, against human reason's appalling aberrations.  This is why, now more than ever before, the eucharistic cult so strikingly characterizes the religious spirit of our Christian people who battle for the conservation of their persecuted faith.

The Holy Eucharist embraces all places.  Surrounded with filigrees of stone, kept in jewel-studded vessels of blazing gold, the Sacred Host is the soul of our magnificent European cathedrals, the center of their great manifestations of devotion, beneath their lofty ceilings, or outside in the open air, beneath the huge vaults of the skies.

It gladdens the humble rural church, which seems to gather around itself the poor huts of the village as the hen gathers her young.  Overseas, from one end of the world to the other, everywhere, we find the Holy Eucharist: in the Arctic regions of perpetual ice and snow, in the heart of the African continent, in the solitude of the Argentinian pampas, in the virgin forests of India, in the sandy vastness of the Sahara, and on barren atolls lost in the immensity of the Pacific Ocean.  What would be the missionary's life without the power to erect a tabernacle wherever he stays?  Where would he find heroic determination, undauntable perseverance, and divine consolation?

Jesus has strewn all over the earth so many Hosts that they seem to cover its whole surface, from east to west, from north to south, with their whiteness.

The Holy Eucharist embraces all men of all races, tongues, and nations.  It distinguishes not between Jew and Gentile, barbarian or scythian, slave or free.  In all it sees only souls.  Every day, early in the morning, the Sacred Host descends into the heart of the peasant's daughter, and into the heart of the poor servant girl; it descends into the heart of the laborer's wife, who rises from her sleep before dawn and goes to holy Mass to receive that daily Bread which gives her strength to bear the heavy burden of the poor.  Through the convent grill it passes to repose in the virgin's heart, where it develops to ever fuller beauty the two flowers of the Eucharist; purity and the spirit of sacrifice, the spirit that makes martyrs.  It descends into the heart of the child, to guard its innocence.  It goes out to meet the homecoming prodigal, and is to him a sure pledge of pardon.  To the humble cot of the poor as well as to the sumptuous bed of the rich, it goes to plant in the heart of the dying a germ of eternal life.  Priest and faithful, saint and repentant sinner, all receive it, and all derived from it strength and courage, light and purity, pardon and consolation, immortality and love . . .  .


O wondrous thought! the poor, the weak, the low
Feast on the body of the living Lord.

Love's great source of suffering here on earth is separation.  It shall be unknown in heaven.  But, as long as we journey through this vale of exile, how frequently separation from those we love is forced upon us by life's vicissitudes!  And then, the final separation of death.  Not seldom, when neither vicissitude or death seem to threaten loving hearts living happily side by side, God Himself, through the austerity of His doctrine and the demands of His love, separates brother from brother, friend from friend, son from mother.

Jesus, who brought a remedy for all evil and a comfort for all grief, could not fail to invent a divine way of abolishing distances, reducing separations to naught, and uniting souls in spite of life's perpetual fluctuations.  That bond of union, the great embrace which enfolds all hearts, draws together all souls, and makes of them but one heart, is the Holy Eucharist.

Tell me, poor child, who, far away from your mother, weep tears of homesickness for her, do you not feel her near when, in your college chapel, you receive the same Sacred Eucharist that nourishes her maternal heart at home?  And you, young man, whose loving heart has courageously made the sacrifice of leaving all your loved ones behind to follow Christ, do you not feel the warmth of your distant home in the Host of your convent tabernacle?  And you, weary missionary, whitened in the rough labors of the apostolate, why do you refuse to accept a well-deserved rest, a return to your homeland, where those who love you wait with open arms?  It is because the Sacred Host unites you every day with those you love. 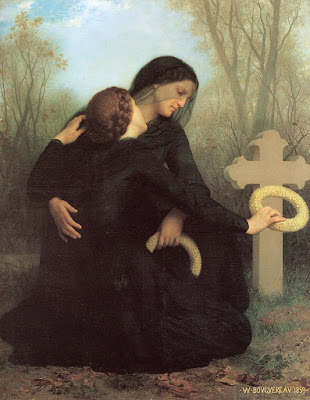 Earthly distances are like nothing compared to the abyss between time and eternity.  But the Eucharist bridges even this immeasurable distance: it unites us with those who are no more.

Poor orphaned child, dry your tears.  In the heart of him whom you mourn, the same Host you receive had deposited a germ of immortality.  Some day your dear father will rise again, because the Host is "the Resurrection and the Life."

In the splendors of glory, where he does not forget the love ones left on earth, he now contemplates without veils the same Jesus you receive under the veils of the Communion Bread.  In the Holy Eucharist Christ brings together, in a close embrace, all those who are united by love but separated by distance and death.

So intimately does He unite our souls that we come to form only one body, according to St. Augustine's words: "Because we eat only one bread, we who are many, form, nevertheless, only one body.  O Sacrament of Christ tender love!  O symbol of unity!  O bond of charity!