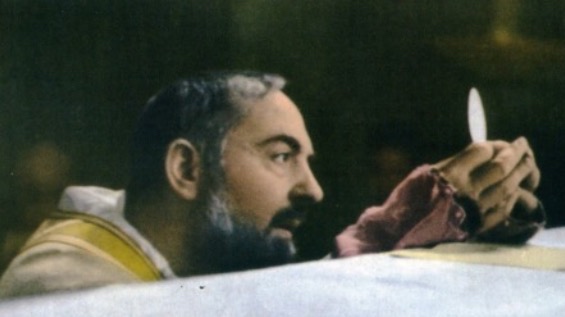 Know when you come before the Lord in the Eucharist, your Beloved gazes upon you with His own eyes.  The yearning of His Heart meets your own - that you should see the love of the other, a love that words alone are incapable of expressing.  "While your lips are still, let your eyes speak.  Yes, tell it all to Jesus with a long gaze full of adoration, love and pleading.  Put all your tenderness in that look, all your desires, your sorrows, your disillusions - in a word, your whole soul. Stir up your faith and seek the eyes of Jesus through the eucharistic veils.  May His gaze and yours meet, be united and form together one and the same light and one and the same fire of love."

Those who love and see each other feel irresistibly attracted to each other; they cannot bear to be separated.  This, we may believe, was one of the reasons why Jesus invented the Eucharist.  He wanted to shorten the distance; to look on us, not alone from far-off heaven, but from near by, so near that, if the sacramental veils of the Mystery were rent, we should be able to hear His throbbing heart and see ourselves mirrored in the pupils of His eyes.

Christian piety likes to think that Jesus in the Sacred Host looks upon us.  There, certainly as in heaven, He sees us as God.  There, too, He knows us by His infused and acquired knowledge.  But it is the opinion of very serious theologians that, in the Sacred Host, He sees us also with His bodily eyes, with the same eyes that illumine the heavenly Jerusalem, rejoice the Blessed, and, on earth, smiled and wept frequently.

In the Sacred Host, Jesus visits again the world He knew during His sojourn on earth.  He lives through the same scenes.  When the Sacred Host is carried in solemn procession, placed on the exposition throne, given to first communicants, or taken as viaticum to the sick, Jesus again, as two thousand years ago, rest His bodily eyes with love on the children, with compassion on the sick, with sympathy on the forsaken and misunderstood, and their glance relieves with joyous hope the anguish of dying.

Given the mysterious manner of Christ's presence in the sacrament, He cannot make use of His senses without a miracle; and nothing in divine Revelation tells us explicitly whether that miracle takes place or not.  But Christian piety and the heart, which "has reasons that reason itself does not understand," almost instinctively take it for granted.  The simple and cordial belief of the faithful unanimously asserts it.  It is chiefly through this belief that eucharistic souls find the time spent in adoration before the Sacred Host so delightful.

Reason itself comes to the support of this opinion: it sees no cause for rejecting it, and, to the contrary, sees several causes for supporting it.

First of all, it does not seeming becoming the dignity of Christ's sacred humanity that His glorified body should remain in the Host without the perfect use of its senses, not only for a fleeting moment, but throughout the centuries and in all the tabernacles of the world.  A body with powerless senses, with eyes that see not, with ears that hear not?  Could such a condition be regarded as becoming to any glorified body, let alone the glorified body of Christ?  Besides, would it be in harmony with Christ's supreme dignity?

We must not forget that the body of Jesus in the Eucharist is longer capable of suffering and painful immolation as it was during His sojourn on earth; it is His body in the same condition of immunity to suffering and of glory as in heaven.

Theologians may well analyze the eucharistic miracle and debate amongst themselves the number of miracles it implies, but to Christian piety there is but one great miracle, and that is the miracle of love, which is unique and sublime, overcoming every obstacle and alone explaining everything.  That love which changed God into a Victim for man, retained Him in the tabernacle to be man's never failing Friend and Companion, and transformed Him into food for souls, had made unto itself a law, which the Gospel of St. John records for us: "Having loved his own who were in the world, he loved them to the end."  That is its law: to the end.  But would it be its law if, after working so many miracles in the miracle of transubstantiation, and after derogating so many natural laws in order to come near man, that love had shrunk from one more miracle and left sightless the eyes of Jesus in the Eucharist?

The Eucharist is Christ's magnanimous response to the needs of a human heart, because through its institution divine love adjusted itself to the weakness of human love.  For our sanctification, doubtlessly, God's omnipresence through His immensity, His special presence in souls through grace, Christ presence in the Church, the sacrifice of Calvary, and communion with Christ through faith, hope, charity, prayer, and grace would have been sufficient.  But, knowing well the demands of human love, God knew that our heart needed more than that.  He knew that it would demand a sensible object so as to be able to localize God and say: "He is there."  He knew that it would ardently desire to press against itself the One it loves and to adore Him in silence.  It was to satisfy these so legitimate yearnings, which He planted in the human heart, and to realize that touching ambition of our whole being, that He instituted the Holy Eucharist.

Our desires, however, would not yet be entirely satisfied, if we had not the certainty that Jesus looks upon us from the Sacred Host.  Not to be able to see Him with their mortal eyes is already a cause of pain to souls who ardently love Him and makes them exclaim with St. Teresa of Avila:

Yet we realize that our present state of trial demand that we be deprived of that satisfaction, because, if we could see Jesus in the Eucharist, earth would no longer be to us a place of exile, but heaven itself.

In the meantime we find consolation in a hope and in a reality: in the hope that some day heaven will remove all veils, and in the reality that even now from out of the Sacred Host Jesus sees us with His divine eyes, just as really as He loves us with His sacred Heart.

Beloved souls, in suffering and in joy, go to Jesus hidden in the Sacred Host and let the sweetness of His loving gaze fill you.

Like the sick who expose their diseased bodies to the healing rays of the sun, expose your miseries, no matter what they are, to the beams of light streaming forth from the Sacred Host.

Why dilute your love in an unceasing flow of words?  Why destroy the charm of intimate communing with Him by childish loquacity?  May the silence of the Eucharist teach you silent recollection!  But while your lips are still, let your eyes speak.

Yes, tell it all to Jesus with a long gaze full of adoration, love and pleading.  Put all your tenderness in that look, all your desires, your sorrows, your disillusions - in a word, your whole soul.

Stir up your faith and seek the eyes of Jesus through the eucharistic veils.  May His gaze and yours meet, be united and form together one and the same light and one and the same fire of love.

As Him only to deign to look upon you.  Tell Him with entire confidence: "Look upon me and have mercy on me."

Remembering that, as soon as Jesus had looked on that young man who came to Him, He loved him, fear not to tell Him also: "Look upon me and . . . love me!"