to make every human being a mother 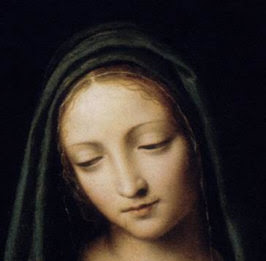 Exploring the religious meaning of the feminine will be an ongoing part of living out the vocation of Spiritual Motherhood; for it is precisely in and through your "being" as woman that this vocation is expressed and bears fruit.  It is not, as the world so often emphasizes, simply what you "do" but who you "are" as woman that is essential and a grace filled reality.  Of course, many do not live that reality and it is more often than not distorted in our culture.   Evdokimov presents the biblical picture of woman as expressing the quintessential image of human nature's spiritual receptivity.  In fact, he writes, "pure spirituality resides far more in the "anima" than in the "animus."  The promise of salvation is given to a woman.  A woman is the first to encounter the Risen Lord.  It is the woman "clothed with the sun" who becomes the image of the Church.  Furthermore, it is the image of the beloved and the bride that God chose to express the kind of communion He seeks to have with us.  And most important of all is the fact that the Incarnation was accomplished in the feminine nature of the Blessed Virgin Mary.

Evdokimov sees a direct correspondence between these images of the feminine and motherhood and divine fatherhood as a feature of God's being.  This being so, he writes, the whole goal of the Christian life is to "make every human being a mother."  Thus, woman sets before us in her very being and nature the purpose and goal of every person: to allow Christ to be formed within us.  Holiness, therefore, lies not in our action but rather in the action of the Spirit within us that brings Christ to birth in the depths of our souls.

Conqueror, adventurer, builder, man is not fatherly in his being.  An ancient liturgical text projects upon the motherhood of the Virgin the light of the divine fatherhood: "You have given birth to the Son without a father, the Son whom the Father brought forth before the ages without a mother."  The virgin Mary's motherhood is thus a human figure or image of the fatherhood of God.

Here we have an explanation of why the religious principle of dependence on the beyond, of receptivity, of communion is expressed so immediately by woman.  The particular sensibility to pure spirituality resides far more in the anima than in the animus.  It is the feminine soul which is nearest to the sources, to the origins, to birth.  The Bible presents woman as the quintessential image of human nature's spiritual receptivity.  In actuality, the promise of salvation was given to woman, for a woman received the Annunciation of the birth of Christ, and it was a woman who first saw the Risen Lord, and it is a woman "clothed in the sun" who is the image of the Church and of the heavenly city in the Book of Revelation.  Further, it is in the images of the beloved and the bride that God chose to express his love for us and the marital nature of his communion with us.  Finally, the most important fact is that the Incarnation was accomplished in the Virgin's feminine nature.  It is who who gave the Word of God her flesh and blood.

To divine fatherhood as a specific feature of God's very being directly corresponds the motherhood of woman, her receptive capacity for the divine.  The whole goal of Christian life is to make of every human being a mother, a being predestined for the mystery of birth, "so that Christ may be formed in you" (Gal 4:19).

Sanctification is precisely the action of the Spirit who makes possible the miraculous birth of Jesus in the depths of the soul.  This is why the Nativity symbolizes and expresses the charism of every woman, that of bringing God to birth in destitute souls: "The Word is constantly born anew in our hearts," says the Letter to Diognetus.  For St. Maximus the Confessor, the mystic is the one in whom the birth of Christ is manifest.  In order to describe his spiritual fatherhood, even St. Paul used the image of motherhood: "I undergo the sufferings of childbirth" (Gal. 4:19)