Clothed with the Word 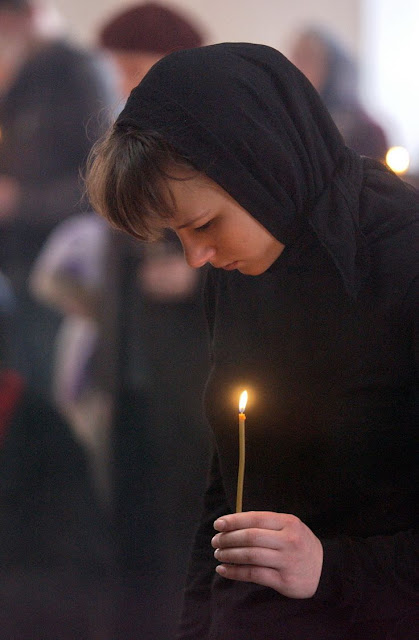 Woman is called to be an heroic servant of the Word; through her holiness preaching in and with and by all her being.  Like Mary she is to hold within her every word of Christ, bringing it to birth, to life, from the depths of her body, from her heart.  Therefore, she must first and foremost be a woman of prayer; not afraid of silence but rather immersed in it deeply.  She must be clothed in the Word.  This is the veil she wears and that will alone make her a prophetic witness in the modern world - attentive most of all to the subtle deceits of the age and the demonic forces that seek its destruction.

"Never in the course of history have events demanded more heroism of women than the events of our times," Pope Pius XII would say.

After uttering her fiat, woman can no longer say: Non, non sic futurum esse, non possumus: No, not this way will the future be, we are not capable.  It is not in vain that the great spiritual teachers were unanimously attentive to and hopeful about deepening the charismatic ministry of women.

It is from the heart of woman that spontaneously, instinctively springs up the invincible resistance to materialism and to all demonic elements which threaten the destruction of the modern world.

The salvation of the world will only come from holiness and holiness is more interior to woman in the conditions of modern life.  According to the spiritual teachers, in silence there is great power.  Active silence is full of presence.  "The only one who knows how to listen to the Word knows how to listen to silence."  In a certain sense, even the Liturgy is the silence of the spirit which listens in singing and in that silence which is an organic part of all liturgical worship, as it is of a symphony.  Thus the Virgin "held all the words of the Son in her heart" (Lk 2:51).  Every woman has an innate intimacy , almost a complicity with Tradition, with the continuity of life.  "The words kept in her heart" are those which a woman is able to recount, just as Mary Magdalen "went and told the disciples that she had seen the Lord and that he had said these things to her"; just as the myrrh bearing women "announced all these things to the eleven and to all the others."  These women are called "Equal-to-the Apostles."  Woman has her charismatic ministry of witness and of being a servant of the Word in her own way, in the manner of the Holy Spirit who manifests, who reveals the Word and then hides himself behind the figure of the dove and the fiery tongues of Pentecost.

The "veil" which St. Paul saw as a sign of the sacred and of the mystery has given way, in these apocalyptic times, to the image of the woman clothed in the sun, of the woman clothed in the Word.  She preaches in and with and by all of her being, by an ontological brilliance.  She brings to birth, to life, from the depths of her very body, from her heart, she extends the Word to the world.