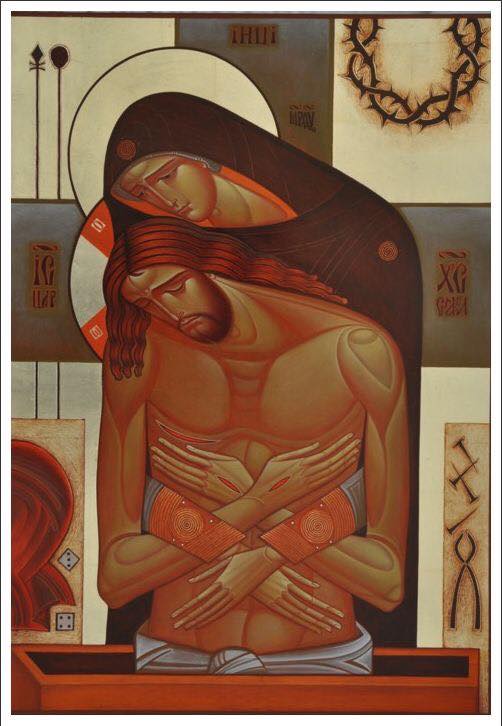 Let the Eucharist shape the contours of your life and relationship with Christ and all others; let it be an oblation of love, an immolation of self for and with the Beloved.  This must be your essential and habitual disposition.  Associate all that you do throughout the day with the mystery of the altar.  Receive the Eucharist as often as you may for "it is only by Communion that we perfectly enter into the thoughts of Jesus, that we fully respond to the desires of His Heart."

The Eucharist is not only a sacrifice, the sacrifice of the Cross recalled and renewed, it is also a sacrament, the sacrament of union, as the word “communion” indicates; it is in order to unite Himself to us that our Lord comes to us. To unite is to make of two things only one thing. But we unite ourselves to Christ as He is. Now every Communion presupposes the Sacrifice of the Altar, and consequently, the immolation of the Cross. In the offering of the Holy Mass, Christ associates us to His state of High Priest, and in Communion He causes us to participate in His condition of Victim. The Holy Sacrifice supposes, as I have said, that inward and entire oblation that our Lord made to the will of His Father when entering into the world, an oblation that He often renewed during His life and completed by His death on Calvary. All this, says St. Paul, is recalled to our minds by Communion: “As often as you shall eat this bread and drink the chalice, you shall show forth the death of the Lord.” QUOTIESCUMQUE enim manducabitis panem hunc et calicem bibetis, mortem Domini annuntiabitis donec veniat.  Jesus Christ gives Himself to us as Food, but after having been first offered as Victim; Victim and Food are, in the Eucharist, sacrifice and sacrament—two inseparable characters. And that is why this habitual disposition of giving oneself totally is so important. Christ gives Himself to us in the measure we give ourselves to Him, to His Father, to our brethren who are the members of His mystical body; this essential disposition makes us one with Christ, but with Christ as victim; it establishes sympathy between the two terms of the union.

But Communion itself supposes sacrifice. That is why we already associate ourselves with the mystery of the altar in assisting at the Sacrifice of the Mass.

We would have given anything to have been at the foot of the Cross with the Blessed Virgin, St. John, and Magdalen. Now the oblation of the altar reproduces and renews the immolation of Calvary in order to perpetuate its remembrance, and apply its fruits.

During Holy Mass, we ought to unite ourselves to Christ, but to Christ immolated. He is, upon the altar, Agnus tamquam occisus, the Lamb offered as a victim, and it is with His sacrifice that Jesus wills to associate us. After the consecration, the priest with his hands joined together upon the altar—a gesture which signifies the union of the priest and all the faithful with Christ’s sacrifice—says this prayer: “We beseech Thee, almighty God, command that these things be carried to Thy sublime altar, in the sight of the Divine Majesty.”

The Church here places in relation two altars: that of the earth and that of heaven—not that there is a material altar in the sanctuary of heaven, but the Church wishes to point out there is but one sacrifice: the immolation which is accomplished mystically upon earth is one with the offering that Christ, our High Priest, makes of Himself in the bosom of the Father, to Whom he offers for us the satisfactions of His Passion.

“These things,” of which the Church speaks, says Bossuet, are truly the body and blood of Jesus, but they are this body and this blood together with us all and with our desires and prayers, and all these compose one same oblation.

Thus in this solemn moment, we are introduced ad interiora velaminis, in the sanctuary of the Divinity, but we are brought there by Jesus and with Him; and there, before the Infinite Majesty, in presence of all the heavenly court, we are presented with Christ to the Father in order that the Father may fill us “with all heavenly benediction and grace”: Omni benedictione caelesti et gratia repleamur.

It is only by being united to the victim that one perfectly participates in the sacrifice—but on condition that we participate in this sacrifice by the reception of the body and blood of Jesus: Quotquot ex hac altaris participtione sacrosanctum Filii tui corpus et sanguinem sumpserimus.
It is then only by Communion that we perfectly enter into the thoughts of Jesus, that we fully respond to the desires of His Heart on the day on which He instituted the Eucharist: “Take ye and eat”; “Except you eat the flesh of the Son of man . . . you shall not have life in you.”