Exemplar: St. Gemma offers herself in reparation for souls, especially Priests and Nuns 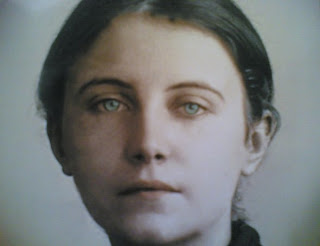 This article is in honor of the "Year for Priests" requested by Pope Benedict XVI, which begins on the Feast of the Sacred Heart of Jesus, June 19, 2009. It is taken primarily from the rare book “A Lover of the Cross –St Gemma Galgani” published in 1940 by the Passionist Nuns of the Monastery/Sanctuary of St Gemma in Lucca, Italy.

Gemma, who knew many of the secrets of the King, knew thouroughly well that those who, at times, most saddened the Heart of Jesus, were the ones who being consecrated to His service, should be enterely His. They, above all, should be the victims of His love and be the one's who especially make love and reparation the essence of their lives. However, such a most beautiful sacrifice is marred whenever such consecrated ones are slothful and cold, or in the extreme cases, deliberately sinful.

In light of this, Jesus showed Gemma in an extraordinary manner how victims were required not only for the conversion of sinners in general, but especially in reparation for some Priests and consecrated souls who, although consecrated to God, were living willful lives of sin. These consecrated souls who by their deliberate sins so wounded the Heart of Jesus, that Gemma, in her great love for Him, would do anything to bring Him some comfort amidst the sufferings of seeing the deliberate offenses of His “chosen ones”. And to encourage her to sacrifice and suffer in reparation for these and for all souls in general, one day Jesus appeared to her and made her hear a pitiful com­plaint. He said:

“How much ingratitude and wickedness there is in this world! Sinners continue to live obstinately in their sins ... My Father will no longer bear them ... Depraved and weak souls do not have the strength to overcome their sins ... Afflicted souls fall into confusion and despair ... The fervent have be­come tepid ... And, the ministers of my Sanctuary ... I have entrusted to them the great work of assisting in the Redemption... My Father will no longer tolerate even them*... I continually give them light and strength, and on the contrary they!... These whom I have looked at with predilection, whom I have always regarded as my most dear ones! ... ".

Here Jesus was silent, and then He went on:

"I continually receive but ingratitude from creatures: their indif­ference is increasing and few repent. And from Heaven I let pour down graces and favours on all crea­tures ... ". It seemed that Jesus would have went on, but Gemma with her heart breaking could no longer stand it and broke in saying that she offers herself once again and always as a victim for sinners. And nothing more was needed to send all the fibres of her heart into motion. [*Assuredly Jesus was not referring to all priests here, but to those who at that time were offending Him by sinful lives. It is quite apparent that the purpose of His address to Gemma was to incite in her a strong desire to sacrifice and suffer for all, especially for those dear to Him, out of love for Him, and those persons first and foremost being His Priests, the ones He lovingly calls His ‘most dear ones’]

Her great friend and “foster Mother” Cecilia Giannini says: “Gemma prayed a lot for priests and she even sweated blood for a whole month for them, in August. [August, 1901 -editor] Once she told me: - “If you could see how priests drag Him [Jesus] with ropes, here and there! - And she kept unceasingly praying for priests. She had a great reverence for them and never spoke a negative word about them. She also prayed much for her spirtual director and also her confessor....”

In his second book on St Gemma, “The Letters and Ecstasies of Gemma Galgani”, Gemma's spiritual director Father Germano CP publishes a letter that was written to him by Gemma that says: “You shall see what I will do when I go to heaven. I will bring you with me at any cost”. The good Father appends this with a footnote that says “I live on this hope; amidst the labors of my exile here below, these words of Gemma shall always be my comfort.”
Father Germanus is entombed near to St. Gemma in the Santuario-Monastero di Santa Gemma in Lucca, Italy. He has been officially declared “Venerable” by the Roman Catholic Church.

Gemma, notwith­standing her "inspired" knowledge about the offences that some consecrated souls bear to Jesus' Heart through the opprobium of their selfishness and the lack of fidelity and fervor in His service, kept always in highest veneration all priests. She was ready to be taught by even the least of them, and she generously lived and sacrificed in reparation for those most dear to the Sacred Heart.

Her suffering for a Community of Nuns

[Gemma writes] 'On Thursday during the Holy Hour, Jesus asked me if I had willingly suffered all that I went through on that night [referring to a previous occasion in the usual martyrdom of Thursday and Friday] for the ill deeds of certain nuns. I answered that I had done so most willingly. And I then heard these words:
"Woe to them, and to the one who guides them, if they refuse to do as Jesus wishes! If they refuse to hear His voice, they will very soon be sorry for it, but it will be too late, because Jesus will no longer grant that Community the peace of the past. Discord will increase among them daily, and they will soon be forced to separate."

We can speculate that these words probaly came from her guardian Angel, who spoke to and guided her frequently.

"Happily, those nuns listened to Our Lord's voice. They looked to their eternal interests, and the peace of Christ was established again in their midst. All this was due to the prayers, dolorous expiation and zeal of one who only wished to be called 'Poor Gemma.' "